Environmental activists are pushing a European court to rule that Norway’s drilling for oil in the Arctic breaches their and future generations’ human rights in the latest legal challenge to fossil fuel exploitation.

Norwegian courts found three times that the government had not broken the country’s constitution and its right to a healthy environment by opening up large parts of the Barents Sea, north of the Arctic Circle, to oil exploration for the first time.

Six young activists and two environmental groups have now filed an application with the European Court of Human Rights (ECtHR), arguing the exploration breaches their rights to life and privacy.

“We have to do everything we can to stop the climate crisis . . . For Norway, it’s important because we have an economy that’s based on oil. We have a problem that the politicians won’t sit down and make a plan for stopping drilling for oil,” Mia Chamberlain, one of the Norwegian activists, told the Financial Times.

The Norwegian activists have been emboldened by a series of recent rulings including a court in the Netherlands ordering Royal Dutch Shell to increase its emission cuts, and Germany’s constitutional court demanding changes to the country’s climate laws.

Six Portuguese applicants have taken a separate case to the ECtHR against all the EU states as well as Norway, Russia, Switzerland, Turkey, Ukraine and the UK arguing that the countries need to take urgent action against climate change.

Norway is western Europe’s biggest petroleum producer, with its largest oil and gasfields in the North and Norwegian Seas. But the activists are focused on the 2016 decision to open up new areas of the Barents Sea for exploration, the first new acreage Norway offered for two decades.

They argue that Norway failed to consider climate change adequately in that decision, especially its obligations under the Paris agreement, as any oilfields in the new areas could continue production well beyond 2050.

“The Arctic is special because of its vulnerable ecosystems. The consequences of an accident, and normal oil drilling, are much bigger than other places,” said Therese Hugstmyr Woie, head of Young Friends of the Earth Norway, one of the organisations behind the lawsuit. 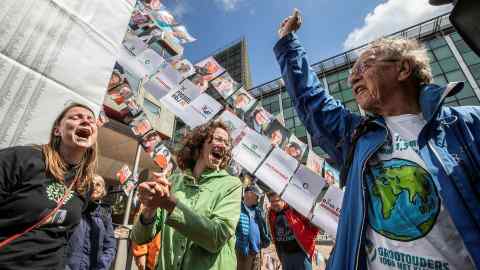 The applicants include an activist from the indigenous Sami community afraid of how climate change will affect his “people’s way of life” and 22-year-old Chamberlain, who said she had long suffered from “climate anxiety”.

She added: “This is what I’ve been struggling with since I’ve been 14. I was unable to watch the news because every time something came on about climate change I thought it was a catastrophe but at the same time my parents were still driving a car.”

The European court, which requires applicants to be personally and directly affected, will decide if the case dubbed “The People vs Arctic Oil” is admissible. Norway’s oil ministry declined to comment.

Are you curious about the FT’s environmental sustainability commitments? Find out more about our science-based targets here

Energy enters the US culture wars

June 21, 2021 OilFields.info Editor in Chef
We use cookies to ensure best experience on our website, if you continue to use this site we will assume that you are happy with it.Ok